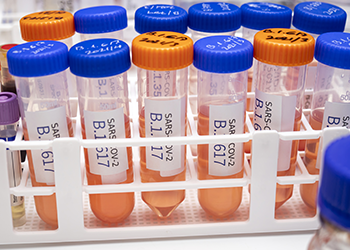 As variants of concern continue to drive COVID-19 transmission around the globe, researchers at Western’s Imaging Pathogens for Knowledge Translation (ImPaKT) Facility are shifting their work toward understanding how to target them.

“The biggest concern is that the vaccines we are using right now might not provide full protection against current and future variants of concern,” said Eric Arts, PhD, Professor and Canada Research Chair in HIV pathogenesis and viral control at Western’s Schulich School of Medicine & Dentistry. “If those start breaking through, we need to be prepared with new vaccine derivatives and therapeutics, and ensure that all the systems that we are using to protect people currently still work effectively against the variants.”

The research team in ImPaKT is one of only a handful in the country working with live virus for the four variants considered as of concern by the World Health Organization (WHO). These are known generally by the public as the variants first identified in the U.K., South Africa, Brazil and India, and by their technical names such as B.117 or B.1.6.17, which have recently been renamed by the WHO according to the Greek alphabet, alpha, beta, gamma and delta, according to the order in which they were detected.

The state-of-the-art imaging capabilities inside the ImPaKT facility provide researchers with a unique window into how the virus replicates inside the body. By using animal models and attaching a fluorescent marker to the virus, they will be able to use advanced imaging technology to see where the virus grows and hides in the body.

Earlier this year, the Canadian Institutes of Health Research put out a call for research projects that would address the threat of SARS-CoV-2 variants to public health. This led to the establishment of the Coronavirus Variants Rapid Response Network (CoVaRR-Net), an effort to coordinate initiatives across the country studying emerging variants of concern.

Stephen Barr, PhD, Associate Professor at Schulich Medicine & Dentistry, is one of five Deputies in Pillar 2 of the Network, which looks specifically at characterizing the variants in cell lines and animal models.

“My work as part of the Network will help us determine precisely how these variants survive better in the body and how our current vaccines respond to these variants and new variants as they emerge,” said Barr. “In anticipation of these future variants and their potential to out-smart our current protective measures, we will also explore the development of next-generation vaccines that can provide us with more robust and lasting protection.”

The Network was established to enable the rapid assessment of both the immune response to the virus variants and whether these variants are resistant to existing vaccines. The findings will help inform decisions regarding drug therapy, vaccine effectiveness, and other public health strategies.

Since the start of the COVID-19 pandemic, researchers inside the ImPaKT facility have been working to understand and find ways to fight SARS-CoV-2, including the development of a vaccine, which is showing promising results in initial animal testing.

The team developing the vaccine, led by Chil-Yong Kang, PhD, is now testing its effectiveness against the current variants of concern.

“By determining how cross-protective the vaccine is against the current variants, we can also hypothesize about how protective it will be against emerging variants as well,” said Barr.

They are also working to re-engineer the vaccine to include sequences from the variants, specifically the beta variant first identified in South Africa.

“We have seen that some of the current vaccines appear to be less effective against this variant, so we are looking for ways to tweak our vaccine to target it specifically,” said Kang.

During the past 18 months, the team has also been working with industry partners to test antiviral products and therapeutics that target SARS-CoV-2, and are now re-testing many of them with the variants of concern.

Barr has been working with Bold Therapeutics, a Vancouver-based biopharmaceutical company, to study a therapy called BOLD-100. This therapeutic was originally developed to treat advanced cancer and is now being repurposed for use in patients with COVID-19.

The drug targets protein production pathways that are used by viruses to replicate within human cells. By altering a protein called GRP78, BOLD-100 may reduce the ability of the virus to replicate in the body and expand to other cells.

Barr and his team are studying the drug’s anti-viral activity in animals and cell culture models, and are now testing its effectiveness against the alpha, beta, gamma and delta variants.

"As vaccines continue to roll out across the globe, there are always going to be pockets of the population that aren’t vaccinated, and we need to have therapeutics at the ready to reduce the severity of the disease for these patients,” said Barr.

Dr. Mark Bazett, Director of Preclinical Development at Bold Therapeutics, says there is a large, unmet need for antiviral therapeutics to treat patients infected with COVID-19 and its variants.

“Dr. Barr was able to rapidly test BOLD-100 in a range of pre-clinical cell culture models,” said Bazett. “BOLD-100’s mechanism of action indicates this therapeutic will likely have efficacy against a wide range of variants of concern.”