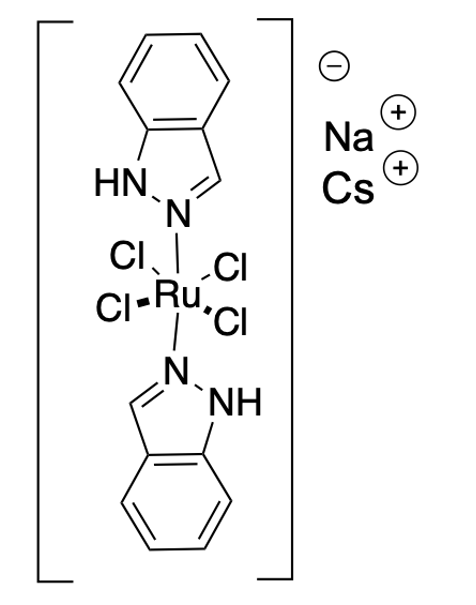 Unlike IT-139 / NKP-1339 / KP1339, BOLD-100 can be manufactured predictably and at commercial scale, with a clean and well-defined impurity profile. This stemmed from research and development leading to the cesium salt intermediate synthesis route that eliminated the need for multiple aqueous extraction steps which contributed to impurities and lack of scalability.

Intezyne Technologies acquired NKP-1339 (then renamed to IT-139) as part of its acquisition of Niiki Pharmaceuticals in June 2013. While IT-139 / NKP-1339 had intriguing anti-cancer activity, it could not be manufactured predictably or at commercial scale. More specifically, the need for multiple aqueous extraction steps during drug substance synthesis severely limited batch size, purity, and overall yield of the process.

Between 2013 and 2016, Intezyne Technologies studied the chemistry of IT-139 / NKP-1339 and explored various alternative chemical synthesis routes. A surprising discovery in 2016 resulted in elucidation of the synthesis route that eventually produced BOLD-100. Concurrently, preclinical studies first identified the importance of GRP78 in the compound’s anti-resistance mechanism-of-action.

Niiki Pharma acquired KP1339 (then renamed to NKP-1339) from Momentous Ventures in 2008, who had previously licensed the asset from the University of Vienna. Niiki Pharma began the initial clinical development of the asset, including the aforementioned monotherapy Phase 1 clinical trial. However, Niiki Pharma had not yet identified the mechanism-of-action and consequently struggled with how best to develop the asset. At the time of the monotherapy study, NKP-1339 / KP1339 was thought to be a replacement for cisplatin – and the compound’s combinational potential was not yet recognized. In addition, the clinical development program at Nikki Pharma extended significantly beyond projections due to a long monotherapy dose-escalation process involving 20 dose levels and the need to investigate a dosing schedule.

KP1019, indazolium trans-[tetrachlorobis(1H-indazol)-ruthenate(III)], was discovered by Dr. Bernhard Keppler in 1989 during a rare metals screen of a variety of compounds looking for platinum alternatives for chemotherapy. This ruthenium-based asset was found to have medical advantages compared to traditional metal-based drugs, including a better safety profile in humans. The drug then was licensed and owned by Momentous Ventures.